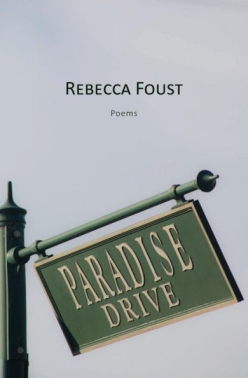 By Rebecca Foust
Published by Press 53
Buy from:

There is great music in these poems, and sonnet after sonnet is masterful. Not since Berryman’s Henry have I been so engaged by a persona: Pilgrim, who ‘like most of we’ is good and bad, hapless sometimes, other times approaching wisdom, always sending deeper and deeper her primary roots.

—Thomas Lux, author of Child Made of Sand and God Particles

In Rebecca Foust’s splendid book-length sonnet sequence, Paradise Drive, we come upon a Pilgrim contemplating the deadly sins while hiding out in the bathrooms at some of Marin County, California’s swankiest parties. As the Pilgrim swaggers into an idiosyncratic, believable, frail spirituality, her unmediated, un-medicated new life emerges. The sonnets of this new life are jagged, fresh, and formed in only the way a stunningly skilled poet can craft them. Foust drives her Keatsian sensibility straight into the 21st Century of terrorism and autism, divorce and yoga, soldiers and syringes, booze and valet parking, determined to prove that truth makes beauty. Not only is Paradise Drive a magnificent achievement, it’s a deep comfort as well.

In Paradise Drive, a sequence of loose sonnets—mostly eschewing end-rhyme for a musical internal rhyme, and varying their line lengths to better construct a singular contemporary voice—Rebecca Foust does it: she reinvents the sonnet form, making it a unit of expression again, not a museum piece sitting on its plinth, forlornly wishing we'd quit paying homage to it. She relies on the arc of the sequence to move her central character, Pilgrim from a numb captivity in a stultifying environment to a widening understanding of suffering and compassion, and thus a point-of-balance vis-a-vis the world; but she strews the individual poems with savagely sparkling jewels of satire, insight, and wit. This is a masterful book, yes, and also a great deal of fun to read.

—James Cummins, author of Still Some Cake and Then & Now

Foust’s sonnet sequence alters the traditions of Western literature, as her heroine relentless probes for truth in places where some might not think to look. –Susan Gunter, American Arts Quarterly.

These poems, so rich in meaning and nuance, cry out to be read and reread.

Foust's language makes me think of Nabokov and how dark and light he can be in the same phrase. Like Nabokov, Foust knows when to turn up the heat or turn down the lights.

With her third collection, Paradise Drive, Foust emerges as an original voice in contemporary poetry. A book of linked sonnets narrated by a character called Pilgrim, Paradise Drive is sharp with irony and humor, offering keen social commentary and moments of lyricism.

Foust’s vocabulary soars and plummets. Her quite considerable accomplishment is to have written a book that is vivacious and filled with snark (even if much of the snarking is directed at Pilgrim herself) while almost never losing sight of an underlying seriousness.

Foust’s language is compelling; her skill and craft authoritative and assured. It would be hard not to read this collection through in one sitting although it is equally pleasurable to take the time to read and re-read these poems. Her registers range from wry—at times, downright snarky—to the elegiac.

This book proves that the record of humankind will be found in poetry It is funny and compelling. It aches with truth.”

What made Chaucer relevant to his time is what makes Foust relevant and compelling for us today.

—M. B. McClatchey, The Collagist

A bravura composition, poems packed with compelling images that never slow things down.

Pilgrim is a complex and flawed every person whose quest for “options” is timely and universal. —Bob Wakes, Coffee Spew

[A] masterful work about the search for meaning in meaninglessness and for fulfillment in a world abounding with distractions and shallowness.

Foust’s targets flay themselves just by opening their mouths.

There’s an exuberant and yet restrained variety to Foust’s sonnets. Anyone eager to see what’s possible with the form in the 21st century will find an excellent model in Paradise Drive. 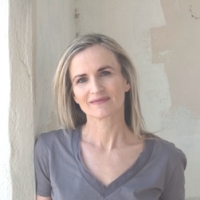 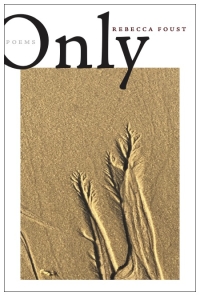